I took a photo drive around the 9th ward the other day. I know most people think that New Orleans is "back to normal", but it is not. Sometimes it is things such as the fact that many schools are not up and running, nor will they ever be, at least not in the same way they were before. Sometimes you still see trailers, sometimes roads are closed. And...the fate of the 9th ward is still up in the air. Brad Pitt is there with his green architects, building houses that look like they belong in a different city. But that is not what I am talking about.

Some people have renovated, if their house was still standing. Some houses have been torn down and only the slabs remain. And many are still standing, empty and sad. Here is a photo collage of some of them. 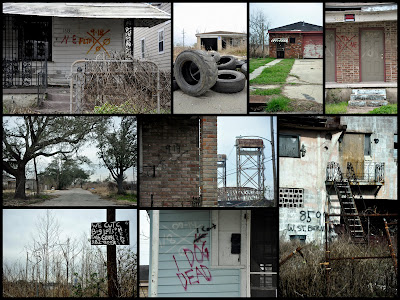 Here is one of the Pitt Green Houses. 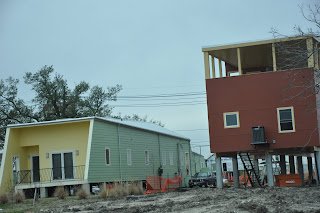 Nine Lives: Death and Life in New Orleans. This book is actually for the April book club meeting, but it was available in the library first, so, I got into it early. Dan Baum writes about life in New Orleans, from the 60s on to today, from the perspective of nine different people. I really enjoyed it. You get a glimpse into what it was like living in the 9th ward, the Garden District and New Orleans in general. This city has a lot of history and Dan Baum tells it in a fun and interesting way. Also, since I am here because of Katrina and each character tells their story of that day, of that time, I get a little more insight into how it would have been to have to live through that disaster.