I milked these goats! 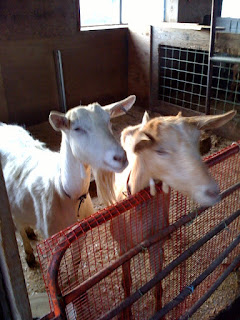 Email ThisBlogThis!Share to TwitterShare to FacebookShare to Pinterest
Labels: 2009

And you wonder why I put up with him?? Sometimes I do too!!! There is at least one good thing about him however -- he has good timing!

Email ThisBlogThis!Share to TwitterShare to FacebookShare to Pinterest
Labels: 2009, Running

And We Raaaan…We Ran So Far Away….

…As the Flock of Seagulls say. Except we did not, “run all night and day”. We only ran for two hours, 8 minutes and 18 seconds and two hours, 9 minutes and 19 seconds…which is long enough!

It was a beautiful day in New Bedford, MA….The temperature was perfect – about 50 degrees, with a bit of a breeze – great for running! We were ready; Mr L had 6 packs of “Goo” (like a squeeze power bar), I had peed about 4 times (I am always worried about having to go during the race)…

We set the pace right at the beginning with our first mile – about 9:40, which was all we were hoping for, somewhere below a 10 minute mile. After that it was all downhill…and then uphill…and then downhill….and finally flat. We pretty much maintained a 9:40ish mile the whole way.

We got to the end about 2 hours later. After a surprise hill at the 12th mile (those bastards) and a wave from Mrs. Bee at the end of the 12th (in her St Pat’s day green, which matched all the race crew), we sprinted the last .1 mile, just in time to make it just under a 10 minute mile!! Whew!

We had a marvelous lunch with Grandma Sue of typical New England fare (as well as a couple glasses of wine – woo hoo!!) then headed home for some family time (and dinner – go carb loading!) at the farm before heading to the airport to go home.

All in all, a successful weekend! Oh, I forgot to mention – I milked a goat. In doing so, I learned that it is easier to milk small tits than to milk big tits. Hurrah for small tits!!
at 10:43 No comments:

Last night I decided to do a "test run" - to run outside in the cold to see if I was going to do okay in Mass. If you don't already know, it snowed over a foot in the Boston and surrounding areas last weekend and the weather now is in the 20s...and I have less than two weeks until the race!! So...I decided to run outside last night. It was 30 degrees in Des Moines (with a windchill -- feels like -30! No, just kidding, it was in the teens with the windchill). My plan: Run 10 miles. I mapped out a route, I got off work early enough so it would be light outside. I went to my hotel and put on my test outfit: gloves, hat, pants, sweater and long socks.

I started off. The first mile was HORRIBLE!!! I knew I was never going to survive the cold of the race!! My lungs were on fire, my cheeks were numb, my feet hurt...I was running through snow and frozen grass. I decided that maybe I would only run 3 miles (the shortest loop I could do without just turningn around and giving up). I missed the treadmill for once.

At mile two, the wind was lesser (or I had gotten used to it?) and the sun started to set, leaving me with a nice view of the sunset. I hit a "hill" in the sidewalk -- great training for the race! It was getting better... By mile three, I decided to do another loop. It wasn't so bad afterall.

So, after my original thought that I was going to die, I decided that it may not be TOOOO bad after all. I hope!!! Pray for sun, that's all I can say!
at 11:33 No comments: