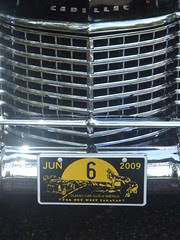 Last weekend we had an Ice Cream Social for about 60 pre-war vehicles. Among them were many Packards, Cadillacs and Lincolns as well as one each of Nash, Franklin, Stutz, Bentley, Rolls and maybe one Chrysler. The oldest car there was from the early 20s and the youngest in the 40s. The folks in these cars, The Classic Car Club of America, did a tour around California and Nevada called the “Far Out West CARavan”, starting in Sacramento, going on back roads through places such as Yosemite, Lake Tahoe, Mammoth Mountain and Reno, and ending back in Sacramento 8 days later. You can read about it in the Feather River Bulletin. You can find more photos HERE.
at 11:23 No comments:

Too High To Get Over 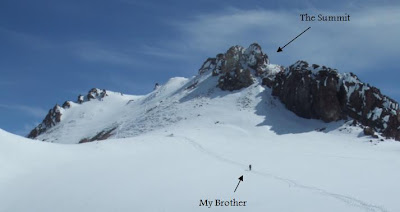 Climbing Mt Shasta is something that not everyone wants to do. Sometimes I wonder why people, myself included, subject themselves to such pain and misery. I usually wonder this as I am trudging up an almost 90 degree hill, wheezing from the lack of oxygen, and tired from climbing since before dawn.


We started the first day in good spirits. At 6,900 ft, it is easy to be in good spirits! We hiked until Horse Camp, which is about 2 or 2.5 miles and is the last source of water (fresh from Shasta Mountain springs…delicious!). After Horse Camp, all you can do is melt snow for water. So, we filled up on water, said goodbye to Buffy, Sierra and Levi, who had hiked up with us to that point, and headed up the hill.

From this point on, it was snow the whole way. No trail, just straight up the mountain in the snow.
After hiking about 6 hours, we reached Lake Helen, which was where we were going to stay the night. Lake Helen sits at about 10,400 ft and is pretty much the only flat spot on the mountain, which is probably why it is a good place to stop. We set up camp and started making dinner. Shortly after eating, we went to bed.

We got up at 3 am to start the climb to the summit. Randy and Matt surged ahead, while Dad and I kept up the rear. I thought the day before was hard, but this climb REALLY WAS straight up! Wearing crampons and using our ice axes, we crept up the mountain, rest step by rest step, finally reaching the top about 6 hours later. Once we reached the summit (14,179 ft), we knew why we did this. From the top you can see Mt. Lassen, Oregon and much of the Cascade Range. The 360 view is amazing. The day was sunny and mostly clear and the mountains around us were beautiful. We also saw some sort of fighter plane that whooshed RIGHT past us as we were standing atop the mountain. It can’t get much better than this!

We were tired, hungry and burnt (sooooo burnt!) but now we still had to climb down. Luckily, you can climb part of the way down and the other half you can glissade, which is like riding a big slide down the mountain. You just sit in the snow and cruise down on your butt. It is cold and wet, but we got down to Lake Helen in about 2 hours. You cant beat that!!

At Lake Helen, we packed up the tent, took half hour naps and tried to stay out of the sun, which was burning us up from the top and the bottom. From Lake Helen back to Horse Camp took a couple of hours; we didn’t get to glissade as much as we wanted, but we did hit a couple of slides, and so it made going down a little quicker. We got back to Bunny Flats (6,900 ft) and the car around 5, starved, burned, tired and sore, but glad we made it.

There's a Cornshop On The Corner 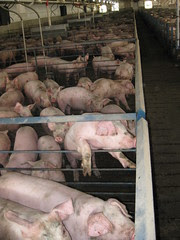 (Written June 9) I am leaving Iowa, and in my wake, I am leaving miles and miles of 6 inch stalks of corn. It is nice to finally see some greenery in Iowa; the landscape has been mostly brown and white for the last 6 months. The tiny little shoots are finally dotting the landscape and creating a feeling of Spring in the air.

I learned a few things about corn while in Iowa, some of it, ironically from a book that I just happened to read while I was here, called Omnivore’s Dilemma, and much of it from the farmers and locals themselves. For instance, did you know that pretty much all of Iowa’s corn is not eaten in it’s natural form by humans? By this I mean that most of the corn grown in Iowa is considered “type-2” corn, and is used for animal feed and processed foods, such as corn meal and corn syrup. Oh and of course don’t forget about Ethanol.
There is very little “sweet corn” (edible corn) that is grown in the state. Also, I don’t know if I was the only one that thought this, but I was under the impression that when the corn was harvested, the combine took it off as a whole cob. However, that is not the case. The combine strips the cobs off the stalk and then the kernels off the cob and distributes this into a trailer that drives along side it. The cobs, stalks and leaves get put on the ground and later get rolled into bales or put in a corn crib where they dry out and are either fed to cattle or put back on the fields later for fertilizer of sorts.
Speaking of fertilizer, the farmers in Iowa used to keep a few animals around in order to fertilize their crops (which were also a lot smaller back in the day). Until after World War II, when scientists were trying to figure out what to do with some of the left over agents of chemical warfare. Enter the man made fertilizer that we know today. After that was figured out, the farmers nearly stopped using animal manure all together. Until recently, when huge pig farms cropped up in the Iowa landscape. These farms each hold about 2,500 pigs each and are quite plentiful. I don’t know the exact facts, but there something like 2 or 3 times the amount of pigs to people in Iowa. There are about 3 million people in Iowa, so do the math. Anyway, some farmers get the pig manure and use it on their fields.
Anyway, I digress. While I was in Iowa, my main job was doing damage assessments for Drainage Districts. A drainage district is a district made up of 2 or more farmers who share drainage pipe or ditches. The farmers in Iowa used to use clay pipe which has holes in it in order to get water into it; they would run it a couple feet underneath their fields so that when there was excessive water, it would drain down through the ground, into the pipe and then get carried to a ditch and eventually into the river. At least two farmers have to share the pipe for it to become a “district”, otherwise it is considered privately owned. So I spent a lot of time while in Iowa looking at fields, ditches and pipes. Actually I learned a lot while I was there and the people of the mid-west were quite friendly and usually eager to answer all my annoying questions about corn and drainage.
at 11:01 No comments: 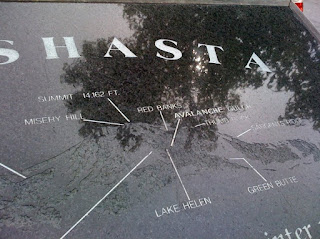