For the first time in about 9 months, we are back in the Northern Hemisphere! We spent one week in Ecuador, ending in Quito and visiting the Mitad Del Mundo, or Center of the World, where we straddled the equator and passed for the first time into the N. Hemisphere. Next we crossed over into Columbia, where we are now.

Columbia is not as scary as the US Government would lead you to believe, but there are still some precautions that should be taken. Buses have been known to be hijacked at night, so we have not been taking buses at night (obviously!) However, this means we have to do all of our travel during the day, which cuts into our time to explore the country. However, the scenery here is beautiful; the mountains are all green and they are in their growing season, so there are plants and vegetables and fruits everywhere!

We first stopped in Pasto, in a 7 dollar flea bitten hotel near the bus station. That was a 10 hour rest stop so we wouldnt have to travel at night. Then we went to a nice little colonial town called Popayan, where the streets are all numbers and you can get lost, but not in a bad way. Next we went to the town of San Augustin, which sits at the top of the Cordillera Central (Central Mountain Range) and looks down onto the valley of the River Magdalena. We took a horseback tour to a bunch of old ruin sites which are from BC.

Our most recent stop is here in Bogota, where we are now. It is nice to be in the city, where there is semi decent internet, but it is just so big and everything is so expensive....we are looking forward to our next stop, Valle de Leyva, where we will go hiking and biking and nature watching.
at 07:36 No comments:

Whew! Well, I must have ate something bad, becuase I was pretty sick for a little while...Luckily, thanks to the F word and Mr L, I was put up in the Lima Sheraton for a few days, which allowed me to get better in style.


Then I met up with Chris and we headed up to Trujillo, which is the jumping off point for the ruins of Chan Chan. Chan Chan is an all adobe city, which is reputed to be the biggest adobe pre-Columbian city in the Americas. It was partly pile of dirt, partly cool old fortress.


Next we headed to Ecuador, where we are now. First stop, the city of Cuenca, where they make Panama Hats (go figure, Panama Hats are NOT from Panama). We went to a National Park and did some hiking, it rained on us a bit, and we sampled the local fare (really good buns!!) Then we took the bus to Baños, where we are now. Baños is the city of hot springs and massages, so we went to the hot springs (it was closed) and then got a massage (only 17 dollars - Ecuador uses dollars so it really seems like my money is going faster...is that weird).

Next is the city of Quito, where we will visit the ecuator and then head north to Columbia. Our trip (feels like it) is nearing the end....we only have a little over a month left!!! It will be strange to be back in the States, doing NORMAL stuff again...will I be able to handle it!!?? We shall see.....
at 15:51 No comments: 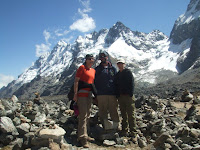 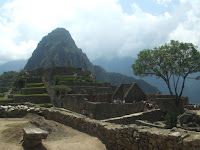 Machu Picchu! We did it! We did a 5 day trek over the Salkanty mountain, which took us to a height of 4600 meters (15,180 ft) into the cold and then down to 1500 meters into the jungle, finally ending at Machu Picchu. It was a hard hike, but very rewarding at the end.


Before going to Machu Picchu we went to the Sacred Valley and to the very important ruins of Sacsayhuaman (pronounced Sexy Woman), which was a fortress made from 8 (or more) sided rocks used to build the zig zag shaped walls (also used to represent the teeth of a puma, where Cuzco represents the rest of the head). 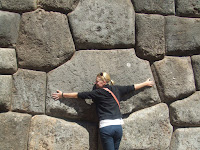 Now we are in Lima, where I will meet back up with Chris, who has been volunteering for the last month in Bolivia while I have been cavorting in Peru (he already came here with his parents, hiked Macchu Picchu, got e-coli and then came back and met up with me in Brazil).
at 09:04 No comments: