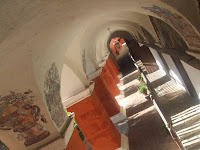 Haha, I can actually say that without feeling like I am disrespectful! We are near Lake Titicaca, in Puno, Peru. According to the Peruvians, they got the Titi and Bolivia got the Caca. The funny thing is that Bolivia actually has the more beautiful side of the lake. There are a bunch of mountains surrounding it which are more than 6000 meters high (19000 Feet) and are covered in snow. It is a very nice place to be.


First we went to the WORLDS MOST DANGEROUS ROAD, which is near La Paz, in Bolivia. We survived! We mountain biked down from about 4000 meters to about 1000 meters in about 4 or 5 hours. Half of it was paved and half dirt, but the whole thing was a lot of fun! Next we went to Copacabana and the Isla de Sol, which is supposed to be where the Inca civilization began.


Next we headed to Peru, where we visited Arequipa, which was built in the 1500s and is quite beautiful with a huge church on the main square which occupies the whole block. We also visited the Convent of Santa Catalina which occupies a whole city block and is where the rich Spanish families would send their daughters (for a hefty fee of course). The picture above is one of Santa Catarina. It was beautiful!
From Arequipa, we came to Puno, where we are now. Yesterday we went on a tour of the floating islands and got to spend the night in the house of an indigenous person as well as dressing up in local dress and going to a local fiesta (pictures to come later - it was great!).
Tomorrow we head to Cuzco and then we will tackle Machu Pichu!! I am very excited about this although the altitude has been a little rough at times!
at 09:21 No comments:

The election is in 3 days. Actually it is not an election, it is a referendum. What happens is this... Everyone goes and votes whether they want to keep Evo or not. If so, he remains President. He has been President for 3 years...normally a term is for 5. If they vote no, he gets impeached and they have to vote for a new President. Supposedly, out of the 9 departments (states), only 3 are for Evo and the other six are against him.

Like I said before, they love to protest here! So, we have protests every day...and if Evo gets voted IN (to remain) there will be even more. If he gets voted out, I dont really know what will happen. Yesterday, he flew to the city of Santa Cruz and they would not let him get out of the plane! They canceled the parades for Independence Day in 3 cities...! These people are crazy! They are saying that never has there been such unrest in the month of the Patria (Patriot)!!!

So, we shall see what happens. I bought a flight to La Paz so I wouldnt have to worry about whether or not I will be able to take the bus...However La Paz is going to be crazy!! Evo is going to be in La Paz during the election... We are making history here!
at 08:47 No comments:

Tomorrow is the Dia de Independencia of Bolivia and the flags are flying! They have been practicing their drums and batons for the last couple weeks and today they finally got a chance to show their stuff.

This week has been very interesting, to say the least. Not only is it Independence Day tomorrow, but the Elections are on Sunday, the 10th. On top of that, the President, Evo Morales, is still imposing taxes, cutting pensions in half and making other changes like that, so...this means people are striking, protesting and rallying on the streets. The last week, there have been protests every day, there has been no school (the teachers are on strike) and there have been roadblocks (no busses or cars can come or go out of any of the cities)... However, this is normal. The only problem is that I need to get to La Paz in 4 days and I dont know if there will be any busses!

However, that is in 4 days. There are parades, parties and fun to be had right now! Viva Mi Patria Bolivia!
at 07:44 No comments: