I wrote the July portion of this post over a month ago and then it just sat in my drafts folder until today, when I was going to start an August post and....voila and oops, there it was!  SO this is going to be a combined belated effort!

July:  July is one of those months that always flies by. It is usually full of summer outings, camping, family and fun. You just can't sit inside in July; in fact I can't even get any chores done, as there is so much fun stuff to do! Needless to say, my garden is a bramble and my fridge looks like a cross between Siberia and the Amazon (empty but tangled?) as I have not been home enough to care for it!

Running: In July, I ran about 240 miles. This was the month with the ramp up and the taper for my 100 mile race at the beginning of August. The first couple of weeks were 70 - 80 miles and the last couple of weeks were very little miles (40ish). In addition I had a week off where I went running almost every day, with the highest day being 40 miles, which was the Rae Lakes loop (beautiful). 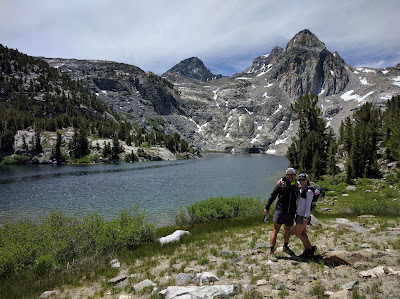 Reading: Not surprisingly, this was not a good reading month for me. I read 4 books, but it was hard, as I was traveling with other people a lot, as well as training for my race. (Books are starred for RHC, bolded for my own).

Travel: I had a great time in July! I went to Tahoe a couple of times, to Yosemite once and up to my parents neck of the woods for a family gathering. My favorite part was...everything!

August: August is usually full of birthdays and outings and trips, and this year was no exception!

Running: I attempted to run another 100 mile race, this time in Colorado, but once again, I did not finish. Due to this, I ran about 156 miles. This included 50 miles of Silverheels for myself and a pacing stint in Leadville, which was about 20 miles.

Reading: I only read three books and they were:

Travel: I went to Colorado twice in August; as stated above, once for my own race and once to pace a friend in Leadville. I am not a huge fan of the Denver airport (or highway 70) but I became very familiar with it in August. In addition, I had one weekend where I stayed home (blissful) and one weekend where I went to visit my parents.

So there you have it, my summer in a nutshell. It is a bit late, but I think that just shows that it was fun!!

How was your summer? Are you ready for Fall? What was the favorite part of your summer?
at 04:54 7 comments: