We made it to Sucre, but it took a while to get here!
From the town we were in before, Semaipata, we caught a bus...which was supposed to pick us up at 7, but arrived at 8:40 pm instead. We got on and got comfy. About 10 minutes later, the bus stopped for dinner. As we had just gotten on, I stayed on the bus and made myself comfortable. All of a sudden the bus was moving, without anyone on it. As I sat there, I felt the bus being jacked up. They were changing the tire!

It was over in about a half an hour or 45 minutes, I dont know, as I kind of dozed through it. So, around 9:40 we got back on the road. I fell back asleep but was awoken about 3 more times by the bus breaking down once and getting 2, yes 2 more flat tires! Then finally around 8 am, the bus pulled over (I had to pee so bad! There are no bathrooms on these buses) and I went to the bushes to pee...Then I realized they were putting oil in it or something - another break down? We arrived in Sucre about 3 hours later than we were supposed to.

Sucre is beautiful. It used to be the capital, but La Paz has taken over that title. It was declared a UNESCO world heritage site in 1991 and rightfully so. It was built sometime in the 1500s and many of the buildings are old and beautiful. The roads are small and some are cobblestoned and there are archways over some of the central streets. We went to the municipal market and drooled over the fruits and veggies before finally buying lunch for 8 Bolivianos, which is about 1 dollar.

Unfortunately, I caught a cold and the weather has been...COOOLLLLD (about 30) and so I am taking it easy lately. Luckily Sucre is warmer (I think it is in the 50s or 60s here in the day time) so it is a good place to recuperate. However, nobody has hot water showers, so if you want to be clean, you have to be even colder. I am deciding to be dirty most days. We leave tomorrow for Uyuni, which are where the salt flats are (and houses etc all made from salt). Supposedly in Uyuni it can get down into the teens! BRRRRR... I need to buy another sweater! From Uyuni, you can do tours of the salt flats, so we will do a 3 or 4 day tour from there, ending up in San Pedro de Atacama, Chile.
at 09:25 No comments:

Every Picture Tells a Story, Dont It? 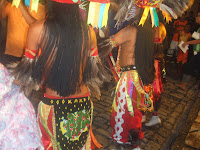 You can visit them here.

Or you can see Chris´pics here.

We just got out of the Pantanal, where we spent 4 days. We had a great time - we went horseback riding, fishing for piranha, cayman hunting, and on an all day safari. We saw lots of birds, including blue macaw and toucans and a huge giant stork, called in Portuguese "tuiuiu", which is really fun to say. This bird is 1.5 meters tall (about 4-5 feet!) It is crazy! We also saw many, many caymans, a giant river otter and many capyvara, the largest rodent in the world, which looks like a huge guinnea pig and SWIMS! They have crazy animals. It was great!

We were hoping to see an anaconda and a giant anteater and a jaguar...or an anaconda eating an anteater and both of them being eaten by a jaguar... but it was not meant to be. We did see an anteater named Phillipe when we got to the border town of Corumba. It was really cool. He was really big and has no teeth but will suck on your fingers and lick you with his weird tongue. He does have large claws, but is basically like a big funny looking dog. (pics will be put online later)

Now we are in Bolivia. We just arrived today after a long (23 hours) 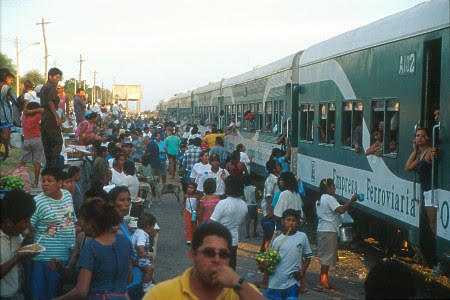 ride on the Death Train, which goes from Quijarros (the border) to Santa Cruz. The ride was good, although long, and we did not have any scary situations. The reason it is called the Death Train is because apparently in the 80s they used to carry a lot of contraband in the inside of the train and the people would ride on the top. The train used to derail a lot and many of the people on the top got killed. Hence the name. But now it does not derail as much and I did not see anyone riding on the top (or any contraband *wink, wink*)
Next stop, the Jesuit Mission Circuit, which is a few hours East of the town of Santa Cruz, where we are now. We are excited to be in Bolivia, but it is going to be hard to adjust to the temperature after being in the warmth of Brazil for so long! Where we are going in the next couple weeks, it gets way below freezing! Oh and now that I finally learned a few words in Portuguese, I have to switch my brain back to Spanish! Oh mio dios...
at 10:23 No comments: 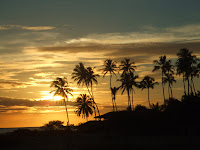 After all that, I arrive in a town with all sand roads, no sidewalks, barely 2 small markets and no stress. This town is, as the locals say, TRANQUILO, tranquil, layed back and beautiful. The beach stretches some 30 km the town one way and I dont know how many the other way... I was going to stay here for two or three days and then...Chris finally met back up with me AND we both loved it so much we ended up staying about a week. We met some great people, hung out at the beach, relaxed at the hostel with our books, chatted with the owners of the pousada, hiked up sand dunes, rode horses, watched MANY sunsets.... it was great. 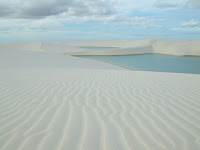 The jeep tour was great! We went in the afternoon to be able to see the sunset, but it was kind of cloudy. However, we did swim in a few warm fresh water lakes and hike over some beautiful white dunes... 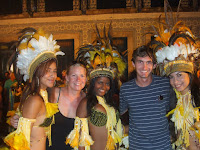 Next we went to the big city of Sao Luis, where we walked around the colonial center, met a bunch of people and got to see the locals practicing for the Bumba do Moi festival by dancing around in cool feather costumes...It was very cool!

So, next stop, Brasilia and then the Pantanal!
at 06:50 No comments: