The word of the month for January on our side of the country is "wet." It has seemingly been raining for the last month straight (or longer?) in the Bay Area, in what feels like a non-stop manner. In addition, the Sierras are getting snow (finally), so we will have plenty of runoff this Spring as well. You would think this signals the end of the water shortage in California, but from what I have heard, it's only a drop in the barrel (hehe). However, it is wreaking havoc on places like the area where my parents live, where the rain and runoff causes fast moving water which takes out roads and railways and leaves people without power and phones for days (5 and 14 respectively).

Running: Even with all the rain (and sometimes hail and snow), I ended up running 203 miles. I have to admit, although I know that I have definitely been getting back into it after a bit of a hiatus, I was surprised to see that I topped the 200 mark. No wonder my legs felt like jelly last week. Don't worry Mom, I took a rest week last week! In addition, I climbed about 30,000 feet. Due to the rain, I did not bike commute at all.

Reading: Because of the rain, and a bit of traveling, I read 9 books in January. Well, actually it was 8.5, since there was one that I lost interest in and ended up not finishing. I have to say, none of them were really great. I only gave two of the nine four stars (and none 5 stars) and they were:

Lily and the Octopus
The Marriage of Opposites

Travel: I went to Portland. One day before my trip, they had a snowpocolypse. When I got there, the world was white and my plans to run in Forrest Park were a bit overzealous. However, I still had a great time eating and wandering around a town nearly carless and sometimes nearly devoid of people. A couple of highlights were Ox, Upright Brewery, Powell's (duh!) and Forrest Park (see photo below). Other than that, I actually had quite a few weekends where I stayed local. 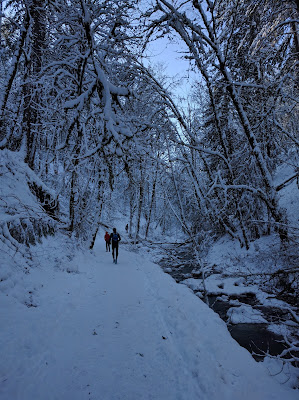 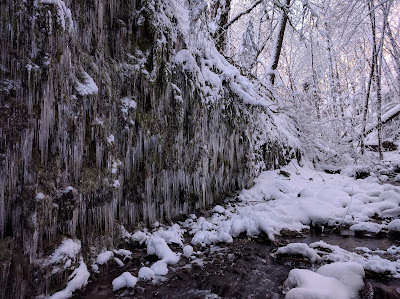 How was your January? Have you started on any of your yearly or monthly goals? What is your favorite thing to do when it's raining/snowing outside?
at 03:00 1 comment: