Yup, it's my third post this week! Already I nearly have more posts in April than I did in March!

March is supposed to go in like a lion and out like a lamb. As you know, I live in a pretty temperate area, so we don't get a lot of temperature fluctuations. However, we had some rain (yay), which was very much needed, and a little bit of snow in the mountains toward the end of the month. So I am not sure if the lion/lamb theory is true.

The stats of March are thus:

Reading: March was a month of Non-Fiction and half read books. I got a bunch (aka too many) of books from the digital library and they expired before I could finish them. When that happens, you have to put them on hold again, and so I will finish them later, but currently, I am half into several books. I did finish two books: Don't Know Much About History (audiobook) and Economics for the Rest of Us: Debunking the Science that Makes Life Dismal. As you can see, they are not the most "exciting" books ever, and were hard to get through at times. I am also trying to read the news every day, which is taking away from book reading time. The number of books I "half-read" was 3.

Running: I ran one race, Way Too Cool 50k, at the beginning of the month. I am currently training for the Boston Marathon on April 21st and the Miwok 100k on May 3rd. I have to admit, I don't think I am doing it right. I feel like I have the legs to run the 100k, but not the speed for Boston. I am not really sure how to train for them both at the same time. Knowing this, I don't expect much at Boston, but I am okay with that. Total miles run in March: 208. An interesting stat: last year in March, I ran 215 miles at an average pace of 8:55. This year, my average pace is 13:06. What a difference!

Travel: I went to Las Vegas, the Grand Canyon, and beautiful Bakersfield by the sea this month! I also had a trip to Cool and another one to Dublin (CA, not Ireland) for brunch and a walk with a very pregnant friend. I had a great time with Amber, on her short but sweet layover in San Francisco. I forced her to eat a burrito (naturally) and we had a great time catching up. I even tried to take her to the transvestite Mexican bar in my favorite neighborhood, the Mission, but it was closed down! Darn it!

Work: One of my coworkers just quit, so we are handling his cases as well as our own, which I am learning is pretty much par for the course. Every time I start to feel like I am catching up on things, they throw something else at us. We also had our performance reviews. Mine was really good; I am very happy with it, however I was not super impressed with my salary increase. I am not complaining too much, because at least I got an increase, however, I expected it to be higher.

How was your March; was it a lamb or a lion? Do you get an annual increase/performance review at work? What is your favorite kind of book to read?
at 03:00 6 comments:

Email ThisBlogThis!Share to TwitterShare to FacebookShare to Pinterest
Labels: 2014, Looking Back, March, Recap

I was picked up from my house at 3:30 am. Yes, that is A.M. This is what happens when you catch a ride with other people; you have no control over the timelines. Ha! The reason for this was that we were driving to Cool, CA to run the Way Too Cool 50k. To get into this race, you have to put your name in a lottery. When I received the notice that I got in, I was so excited, and I went to the entrants list to find out who else had gotten in that I know. There were 1200 entrants on the list! This is not normal for a trail race. Usually it is anywhere from 200 - 600 people. I have to admit, I had to groan at this a bit, because this is a lot of (too many) people. However, I was excited to run in a place where I had only run a couple of times before. Plus, part of this course is on the Western States course, which is kind of fun.

Cool is in the Sierra Nevada foothills about 20 miles from Sacramento, near the American river, in a gold mining area. It was a stagecoach stop during the gold rush.  It's a really pretty area and there are tons of trails to hike, and swimming and fishing in the river to be had. 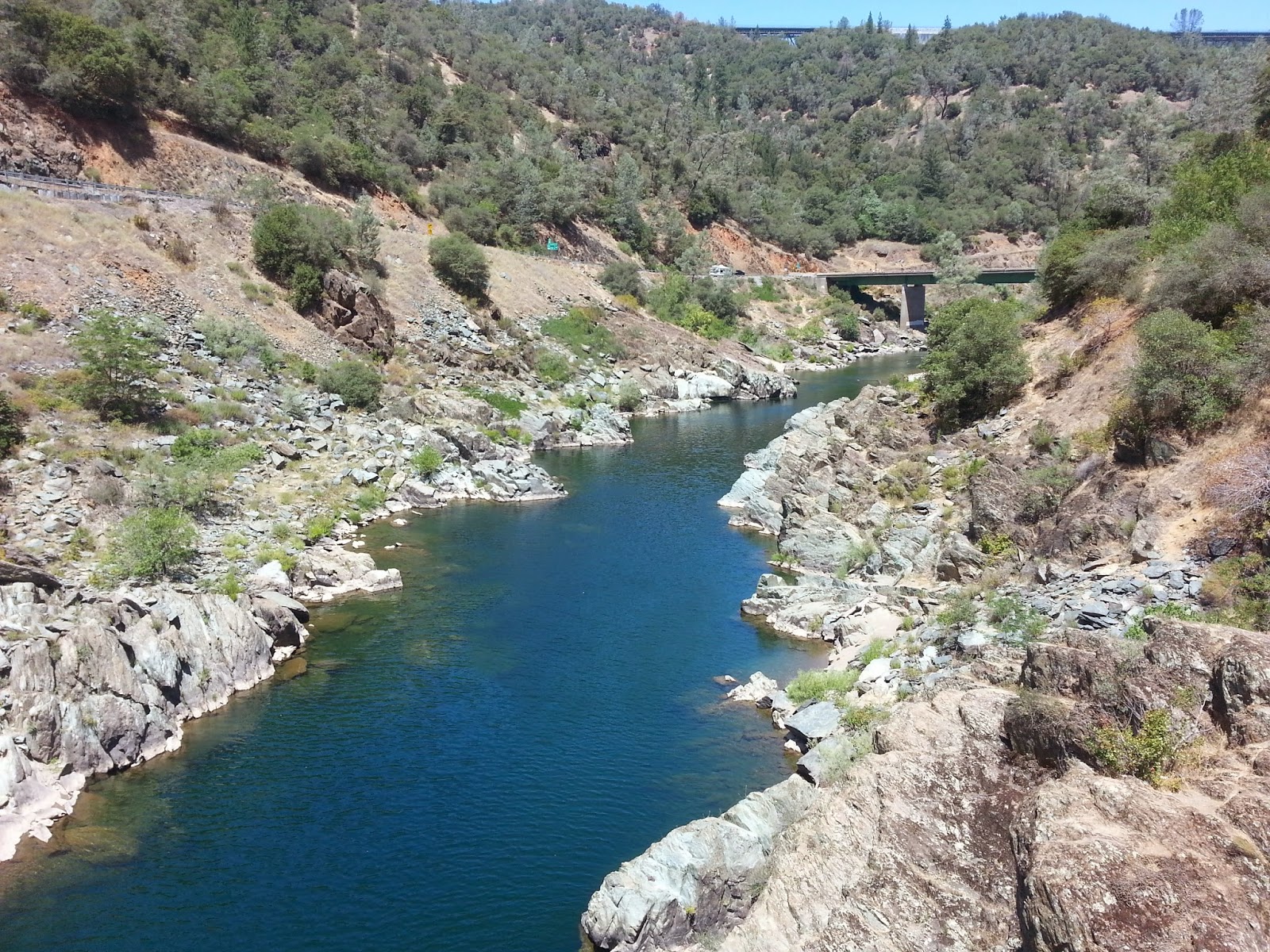 We arrived in Cool before 6 am. We got a great parking spot, thanks to the early departure, and went to pick up our bibs etc. I was there with two other people, one who was running and another who had not signed up, but was going to wear the bib (without chip) of a friend and run with the other friend for a while. It was pretty cold so we stayed in the car to keep warm until the start. Once the sun came out, we got ready to go. This race has so many people that there is a wave start. I was in wave one, which started at 8 am. 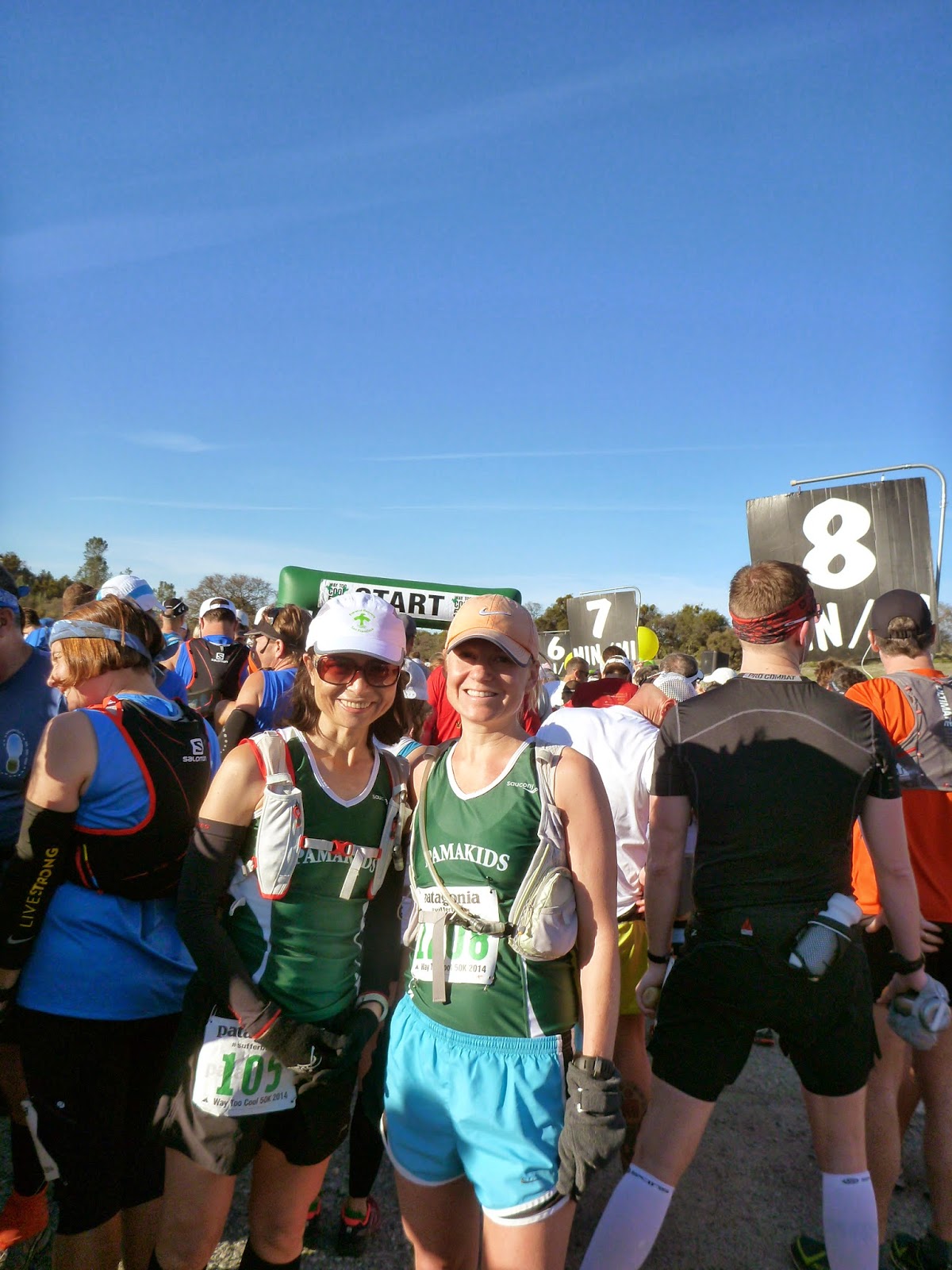 The race started and we were all running in a pack. There were so many people; we could not really run any faster or slower; we just had to scoot along with everyone else. I stopped for a pit stop and then caught back up to my friends. The first mile was on a paved road and then it turned into a single track. The single track was brutal, as there really was no room to pass. I was going at about a 10 minute mile, which was slower than I wanted to go, especially since it was fairly flat. 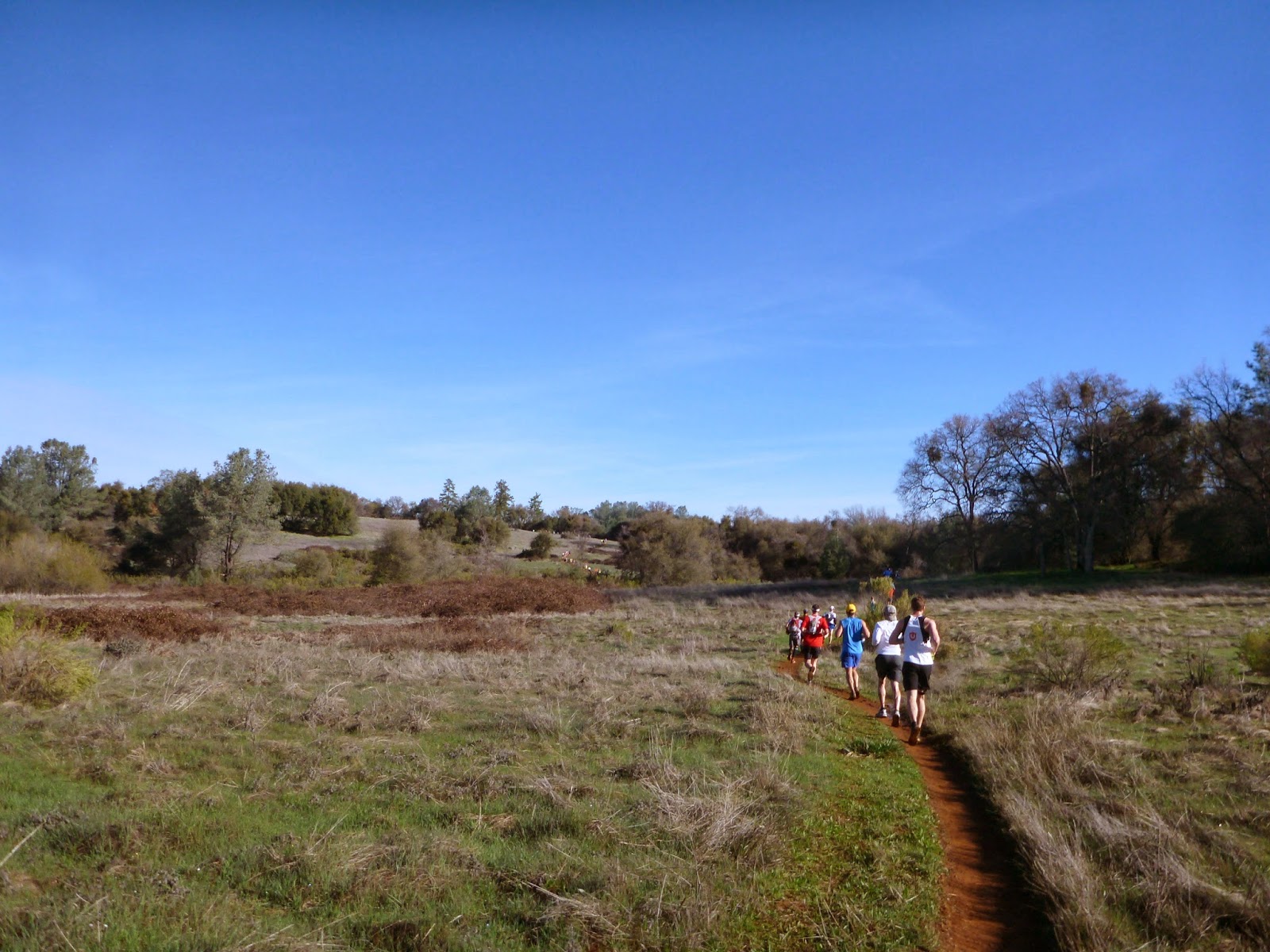 Around mile 3, we went through our first water crossing for the day. It would not be the last. It had rained the week before and the creeks were running full, and the trail was very, very muddy. Everyone was slipping and sliding around and trying to avoid the really big, slippery sections, but it was difficult. The single track loop lasted for about 8 miles, then we looped back around to the start.

The next loop started out kind of flat, then there was a downhill section leading down to the river, where we ran along the river for a while. My legs were getting tired, as by this time, I had been running for a while. This course was so far the flattest trail race I had ever run. Usually there are some ups and some downs, which give you a chance to regroup a bit and regain your strength, but this was flat our running for a really long time. Until about mile 15, I was running about an 8:30 pace. 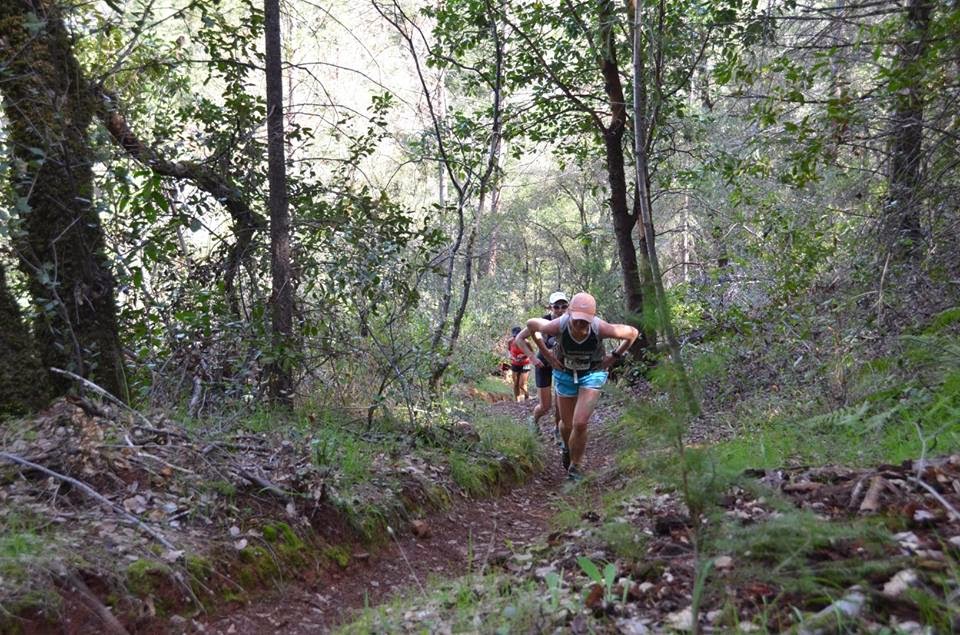 At mile 15, we started up a hill and my pace slowed to about 10 minutes, then as the hill got steeper, it became 13 minutes, then 16 minutes. Around mile 15, I also started to have to use the restroom, but I thought that at the next aid station there would be a portapotty. There wasn't, so I waited until the next one. Still nothing. By mile 26 or so, I was bursting. I would have just pulled over and gone in the bushes, but there was poison oak everywhere! Around mile 20, the hill stopped and the course flattened out a bit. It was rolling up and down a little, but was still pretty runnable the whole time. My legs were pretty tired by this point and I started to slow to about a 12 minute pace. The only reason I was even keeping it that fast was because I really had to use the bathroom! 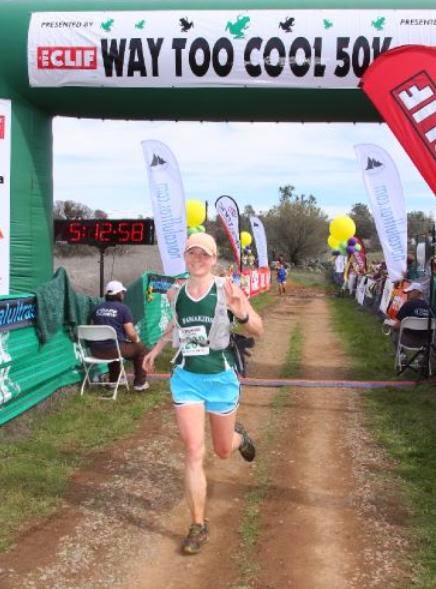 I crossed the finish at 5:12 and ran straight to the portapotties, do not pass go, do not collect $200! Afterward, I went back to the race expo, where there was recovery drink, pizza, and the famous frog cupcake! The day had turned out really nice and it was really great to just sit in the sun and eat pizza. I hung out for a while and chatted with some of the other racers. 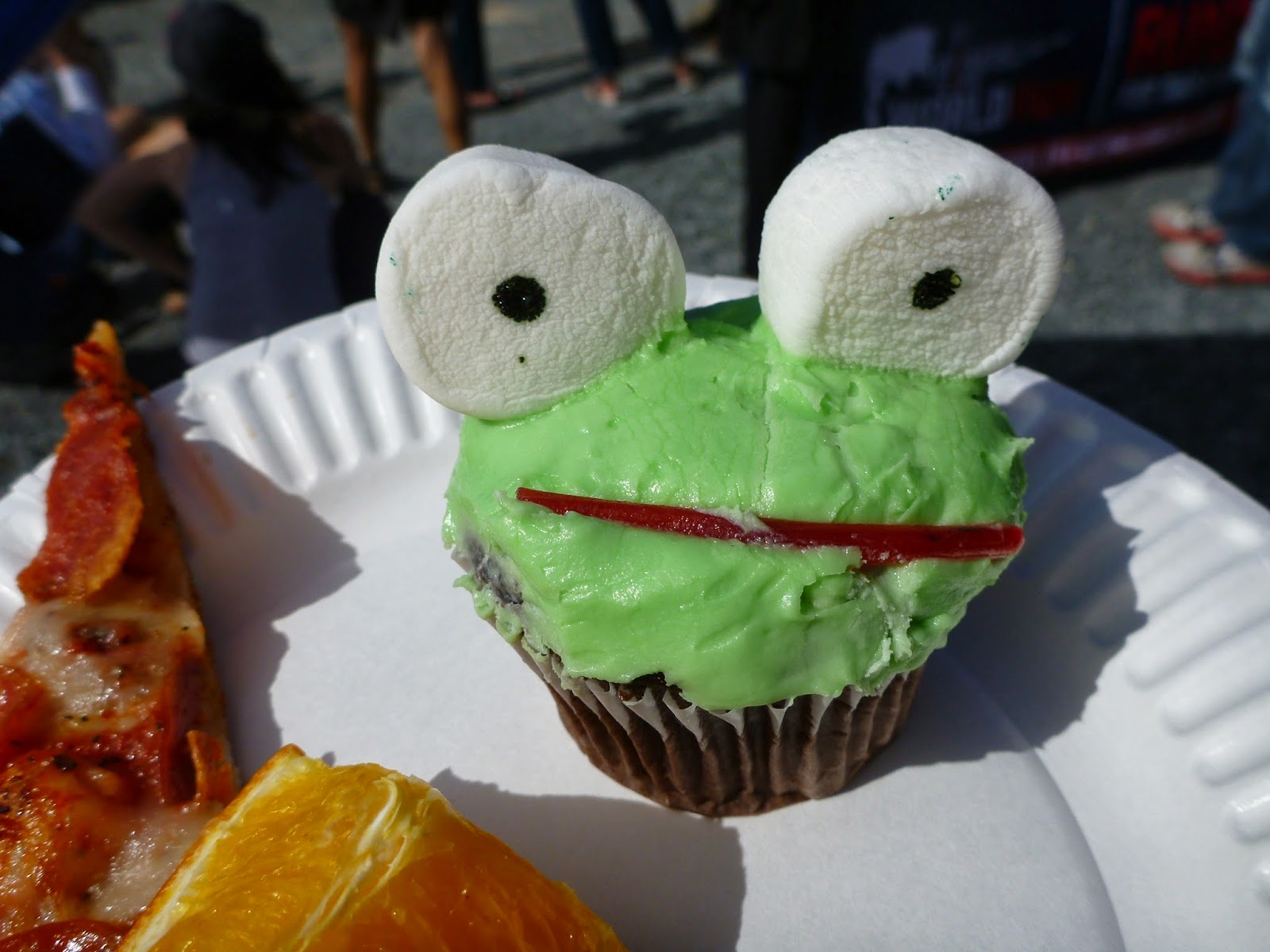 The verdict? I don't think I would do this race again. The sheer number of people is a turn off. It feels commercial. I didn't really like the big expo full of people trying to sell things after the race. However, the shirt is great and the food afterward was pretty good. The location is good and if you are brave, you can even go for a dip in the river afterward. Also, I feel that it would be a great race for your first 50k. Its well organized and there is not too much elevation gain and it's almost like a road race feel in a trail-like setting.

Have you ever been to gold rush country? Do you like it when a race has a big expo? What is your favorite treat after a workout?
at 03:00 9 comments: