In 2017, I read over 90 books. According to Goodreads stats, I only gave two of them five stars, 35 were given four stars and 44 were given three stars. I tend to not hand out five star review casually, although it ends up being hard to sort through the four star reviews when there were so many. Probably some of the fours should have been fives, but such is life.

An interesting stat: this year, 26 of the books I "read" were audio books. However, they tend to not get as high of ratings. I am not sure if this is because I probably do not focus as much when I am listening, or that many tend to be non-fiction, or that I just don't pick the "fun" books as audio books. Only one of the books on my list was an audio book. However, 6 of the 13 books I picked were non-fiction! Anyway, without further ado, here are my top thirteen reads from 2017 in no particular order.

My First Summer in the Sierra by John Muir: I gave this book five stars and I liked it so much I even wrote an entire post about it! So I won't go on about it too much. In summary, it is a fresh new look at some of the places that I know and love, and it brings a new appreciation to the outdoors as well as to life itself.

When Breath Becomes Air by Paul Kalanithi: This was the second (and last) book I gave five stars to this year. It is a true story about a neurosurgical resident who in an interesting twist of fate ends up becoming a patient himself. I liked it so much that I read it in one sitting. It is well written and you can't help but love and relate to the writer and main character, and I was rooting for him throughout the entire book.

Animal, Vegetable, Miracle by Barbara Kingsolver: Kingsolver and her family, who live in northern Virginia, decide to grow or raise their own food for one year, only supplementing when absolutely necessary and then only from local sources. I was inspired by her description of growing asparagus and raising (and slaughtering) her own turkeys. This book made we want to run out and get some baby chicks! Its a fun story and an interesting look at what it takes to be self supported, food wise.

The Alice Network by Kate Quinn: This was a late addition; I actually just finished it. It is set during both WWI where you meet the first character, who is an English spy working in France. Then it takes you to modern day, which is just after WWII, where you meet second set of characters, whose lives end up tangling with the spy from WWI. All the characters are likeable and brave and interesting and the story line is fun and informative.

To the Bright Edge of The World by Eowyn Ivey: This book is written as a series of letters and journals between an Alaskan explorer and his wife in the 1800s. I love books written in this form as you really feel like you are in the person's head and you feel like you get to know them really well.

Born a Crime by Trevor Noah: A story of a boy growing up in South Africa during apartheid who has a black mother and a white father, which was a no-no in those days. He details some of the difficulties as well as how his family got through them. He does it in a humorous way, although the story is anything but funny. I didn't realize this but he is also the host of the Daily Show, and after reading this book, I watched some of his standup, which was really funny. I like that he is a multifaceted individual, not just a funny guy.

The Year of Yes by Shonda Rimes: This was the only audio book that made the cut this year. Shonda Rimes is the writer of Grey's Anatomy as well as several other shows and I was sure this book would be another richy rich talking about their problems and how they overcame them. However, Shonda is a painfully shy introvert who hates public speaking and would rather be behind a desk writing. When she decided to say "yes" to everything, she had to step out of her comfort zone. This book is a funny rendition of the uncomfortable things she ended up having to do (for instance, give a speech where she talks about "pooping her pants.")

Here are some others that made the cut: The Curious Charms of Arthur Pepper by Phaedra Patrick, All The Ugly and Wonderful Things by Bryn Greenwood, Small Great Things by Jodi Picoult, Love Warrior by Glennon Doyle Melton, Salt to the Sea by Ruta Sepetys and The Underground Railroad by Colson Whitehead.

What was your favorite book that you read in 2017? I am always looking for suggestions for my to-read list!
at 03:00 2 comments:

Email ThisBlogThis!Share to TwitterShare to FacebookShare to Pinterest
Labels: 2017, Best Of, books, Looking Back, Recap

November to me means the beginning of many things: the rainy season, the holidays, the  end of the year. It is always strange when it hits you that this year is almost over! Then you start to reflect on what has happened over the last year and it all seems to be a bit surreal at times! Here are the stats.

Running: In November I ran 172.7 miles and climbed 34,108 feet. Most of my mileage was due to a couple of longer runs on the weekends as well as one race, the Quad Dipsea (QD), which has become sort of an annual tradition. The QD is a two time out and back which has about 2,500 feet of climbing for each out and each back, for a total of almost 10,000 feet. This is always held the weekend after Thanksgiving and is an excellent way to burn off those turkey calories. I also biked 41.8 miles, which brings the yearly total to 268.8 which is an average of about 5.6 miles or one round trip commute per week.

Reading: I did not read as many books in November, most likely for a few reasons. One, my audio-book reading time goes down when I am not in the car or running alone and I did not really do much of either. For real books, I have been getting regular old hard backs from the library, which by the way never have as long of a hold period as the eBooks. However, other things in life are taking up precious reading time, so I have not been doing as much reading of the real books either. Here is the list in order of preference (audio-books in italics). I ended up reading 5 books. 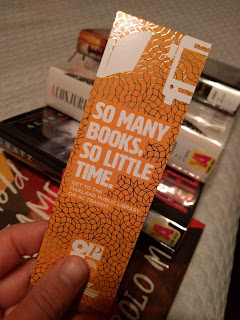 Travel: This month I did not stray too far from home, mostly because it was the holidays and I hosted so I stayed around for that, and then I had the Quad Dipsea one weekend so I stayed around for that. Otherwise, I did a quick weekend trip to Pomona to go to the NHRA drag race finals, which were a lot of fun even though my guy did not end up winning. Also, I did go to Marin county for runs with friends and to do the annual volunteering gig with my brother, where we sweep the course of the North Face 50 mile race. After doing it for four years in a row, we finally earned a new radio handle this year. We will heretofore be known as: Menudo!


Etc.: The garden is dead. I was thinking of planting some winter things, but am not sure I will get to it in time (or maybe I am already to late). So now it's just raking time, although I did buy a fun toy, a leaf blower, so I will probably have some fun with that in the coming days! Although I have never really used one before... Wish me luck!


What happened to you in November? How was your Thanksgiving?
at 03:00 1 comment: