My realistic goal: finish this race.
My satisfied goal: get a PR (and hopefully sub 4)
My hopeful goal: BQ

To BQ, for my age group, I would have to run a 3:35 or less. According to my fast half marathon time, this is doable. But that race was nearly three months prior to this one. It meant I would have to run under an 8:12 pace the entire time. However, I didn't want it to be THAT close, so I thought I would shoot for a 3:30, which is an 8 minute per mile pace. I have to be honest with you though; after the last few weeks of training that I have had, I was not hopeful. I have been tired. I have been unmotivated, I have not been doing speed work and I have been running about an 8:45 pace for shorter runs.

I did not feel ready. I was ready to be happy to come in under 4 hours.

My strategy was this, and I often use this one to "trick" myself: I would start off at the right pace and if I got tired later, I would slow down. I had to try at the beginning though. I got in line right behind the 3:15 pace group and I thought in my mind that if I could only stay in front of the 3:30 group, I would be okay.

The race started and we were off like a shot. The beginning of the race was difficult. It was on a creek path with only a width of a few people and everyone was trying to get ahead and find their pace but there was no room to do so. As I was trying to get my pace, I passed under an overpass and my parents and uncle were up there, cheering me on. It felt great to have spectators, and to have someone to be accountable to, even though they would never say anything bad if I didn't make my goal. Still, I was running for them, as well as myself.

The course was a figure eight loop on the creek path that went around once for the half marathoners and twice for the marathoners. This was both good and bad. Good: my parents got to see me three times: once at the start, once at the middle, and again at the end. My brother also came and he got to see my 8 times, as his place was in the middle where the eight crossed over itself so he biked back and forth to cheer me on. Bad: I had to run the same route twice.

So I went around the loop once, saw the Parentals, waved, and started on the second loop. This loop was a little bit harder. I was wavering around the 8 minute mark, but still keeping it under. However, it wasn't much under, and I kept thinking, "DON'T let the 3:30 group pass!" Mile 14-24: 7:54 average. The good news was, at this point, I had hit no wall. I had taken two chews at mile 6 and then two more at each 3 mile mark after that. I had had water at all the stops, but only a sip or two. Around mile 19, a girl caught up to me, said she liked my pace, and we ran together for a couple miles and talked. I kept waiting for the other shoe to drop.

The other thing was that half of this path was a hard packed dirt and gravel path. I wore my Saucony Kinvaras, which don't really have much of a sole. By the second loop, and especially by mile 18 or so, I was really dreading the dirt sections!

At mile 25, I slowed down a little. Mile 25: 8 minutes. At mile 26, my legs started to feel really tight and it was hard to keep up the pace. At this point though I kept repeating my mantra about the 3:30 group over and over. Just stay ahead of them! I may have mumbled, "keep going, keep going, keep going" under my breath (or out loud) several times. Mile 26: 8:06/mi


Then I got to the last .2 miles and there was Dad, taking photos of me at my finest. I think I even managed a smile before rounding the final corner and totally chicking this dude right at the very end. My mom even has the pics to prove it. 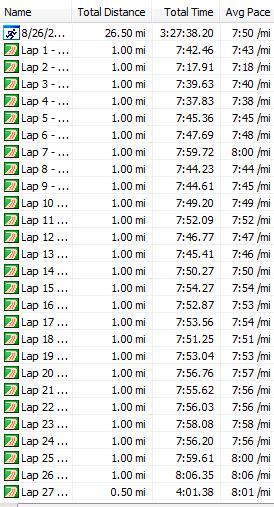 At the end there was a band and pancakes and wine, naturally. I mean, we are in Sonoma county after all.  But I decided to forgo those in exchange for a huge bacon and avocado omelet at the Omelette Express with the Fam.

Do you hit "the wall" when you race? Do you make hopeful and/or unrealistic goals that you sometimes end up achieving after all? OR Do you underestimate yourself sometimes?

Don't forget to join up at Jills for Fitness Friday!
at 03:00