Do you remember your favorite childhood memories from each season? As you may already know, my friend Lisa had an idea to blog about your favorite things from childhood and I loved it. You can find my Summer post HERE and my Autumn post HERE.

Here are some of my favorite things about Winter from When I Was a Child.

You may find this one kind of obvious, but number one is Snow. When I was younger, we used to get dumped on in the winter time. We would get days off of school and we would build snowmen and go sledding and have snowball fights. Then we would go inside and drink hot cocoa and dry out. It was great. Imagine that if it snowed today you could have the day off and you didn’t have to drive anywhere, do anything, or shovel. Wouldn’t it be a lot more fun!? It seems like through the years, it has been snowing in our area less and less. We still get a few good dustings, but not like we used to. 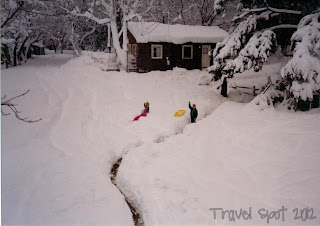 Another one which is pretty much a given is Christmas. I already wrote an entire post about what Christmas is to me, but as a child, I remember cookie baking, decorating, staying up late waiting for Santa, reading the Night Before Christmas, cookie eating, advent calendar decorating and more! It was an entire month of great stuff. 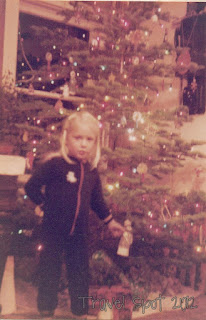 Skiing:  Since I was young, we always went skiing every year. I vaguely remember learning to ski and hating it for a little while since I couldn’t get it. Then I stopped whining and got the hang of it and after that I was unstoppable. We used to ski at a tiny resort near home that only had a Poma lift, which most people probably haven’t even heard of. It’s a long pole suspended from a cable and you stick the pole between your legs and it pulls you up the hill (if you look very closely, you can see it in the background in the below photo). Sadly that resort has been closed for years, due to the lack of enough snow and the competition from bigger resorts nearby (who make their own snow). 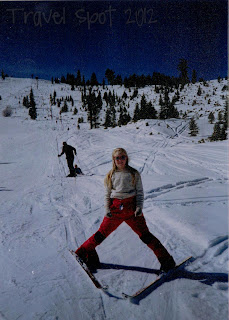 Ski Team: This goes hand in hand with the last one, but deserves its own recognition. I started ski team when I was young; we had a Buddy Warner version. Then when I was older, I got on the High School ski team, which was a blast. We used to have meets every Monday, so we would get out of school each week and ride a rickety old bus up to the resort, laughing and singing the entire way. Okay, maybe I just made that part up, but the bus rides were fun! Then we had to do races in the morning, but the rest of the day was free skiing. We also had practice once a week. Twice a week skiing! Little did I know how lucky I was those days. Now I am lucky to go once a year. 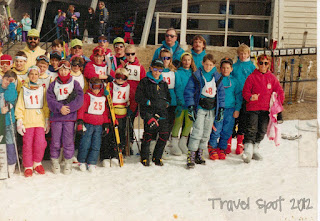 Sledding: We had the wooden sled with runners, the plastic one with the handles on each side so you could steer and brake and the round plastic one.  We would take turns using them. The choice of sled depended on which kind of snow you had that day. 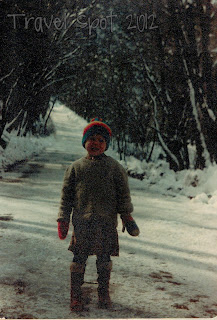 Card Games: Oh the long, dark winter days. What better time for a card game? We used to sit and play cards for hours. We even made up our own rules, so the games would last longer. We made up a version of Rummy where the points are all higher but you have to play to 5000. If we had enough people, we would play Spades or Hearts.

Baking: Winter and Christmas are always about making cookies! Our favorite kind to make were chocolate chip, as evidenced by the batter splatters in the Joy of Cooking. The other thing we always made was Banana Nut and Cranberry Nut Bread.

Christmas Treeing: This may actually be done in fall, technically, but it reminds me of winter, so. There is something great about going up into the mountains and chopping down your own tree.  I apologize to the tree huggers now, but it’s fun. It’s cold, and sometimes your car gets stuck in the snow and your socks get wet, but you end up with your own little tree, the fruit of your labors, in the end. 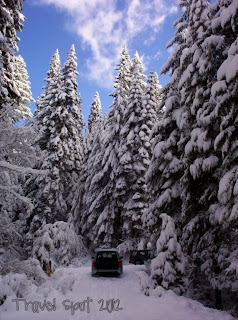 There are of course, many other memories and good times to be had by all, but they are for another day!

What is your favorite childhood memory from the wintertime? Did you have snow where you grew up? Do you like playing card games?
at 03:00

Email ThisBlogThis!Share to TwitterShare to FacebookShare to Pinterest
Labels: 2012, lists, When I Was A Child, Winter