So L.A. and a Giveaway 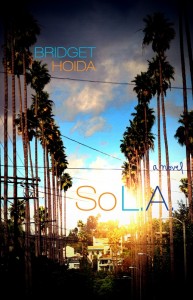 So L.A. by Bridget Hoida

Have you ever been to LA? Then you know the drill; there are people with big everything: houses, cars, sunglasses and boobs. Yes, boobs. You know what I am talking about. So does Magdalena de la Cruz, or at least she thinks she does. Magdalena hails from Northern CA and she moves to LA when her brother tragically dies in a climbing accident that she feels responsible for. She and her husband have hit it big selling expensive bottled water to the rich, and they move into a huge house and try to fit in with the Southern California lifestyle. Magdalena buys the big car, wears the big sunglasses and gets the big boobs, yet she is still not happy. Her marriage starts to decline and she seeks the solace of a bottle of gin.

This story is about her mental state and how she attempted to find her true self amidst a city full of materialism and people who seemed to care more about looks than love, herself included.

I enjoyed this book as a quick and easy read and something to pass the time on a Sunday. I read it in one day, as it was easy to follow. Even though I kind of disliked the main character, I found that the story moved quickly along. I found the character very shallow, although at the same time I did see that she was struggling to get out from under that self absorbed attitude at times. I cannot say that I related to her, although I am from the very area that she came from in the beginning, and a small town to boot, so we should understand each other.

However, we have all wanted to be liked in one situation or another. Whether you are in an all male work environment and you start watching football so you can join in on the conversations around the water cooler, or if you are a girl, trying to impress a guy, so you wear a certain outfit or act a certain way, we all understand that need for acceptance to a certain degree. So in that case, if I change the situation around a little, I can relate to her to a certain extent. But she takes it a little too far, and loses who she really is in the meantime.

So I had mixed emotions about Magdalena: I felt sorry for her; I hated her; I understood her; I wanted her to find her true self and to stop playing games.

As for the book, it made a good point about how we need to accept ourselves for who we are because trying to be someone else only gets us in trouble.

I gave the book a three out of five on Goodreads. I would recommend this book as a fun, quick and interesting read.

Now, for the fun part! One lucky reader can win a copy of this book! All you have to do is go to the author's website and leave me a comment telling me one thing you learned from it. It can be anything you want. If you are not a winner, you can still buy the book here. Contest ends August 31 at midnight PDT. Winner will be announced shortly after.

Disclaimer: I received a complimentary copy of this book from TLC Book Tours in return for an honest review. You can see a schedule of the other blogs on tour here.

Have you been to L.A.? If so, what did you think / if not, what do you imagine it to be like? In what way have you ever tried to impress people around you?
at 03:00