Recently, I found out about a gem in my own back yard. Literally, it's about 3 miles from my house (in Oakland). In my book, that is walking distance (in case it's not, there is a bus). It's called the Bay Area Ridge Trail. It's 325 miles of trails around the San Francisco Bay, with a proposed future distance of 550 miles, as you can see from the map below. I think this is great, since I grew up living ON the Pacific Crest Trail (2,663 miles from Mexico to Canada, through CA, OR and WA) and hiking, hikers and trails have always been a big part of my life. 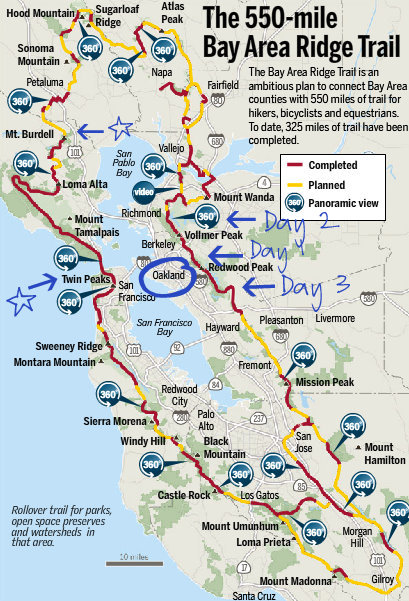 I decided then and there that I was going to try to hike, walk, or run as much of it as I can. I found a trail tracker, where you can track your miles.

So, right now, since I am was living in Oakland, I started out with a few sections near my house. It was beautiful. The first day, I went for a 17 mile out and back trail run, which included sections of redwood forests and open grassland and had views of the bay area, including San Francisco and the headlands beyond. It was great. The only downside was that I took a wrong turn around mile 4 and ended up running through a grassland area (for about 8 miles. Oops). I only realized I was lost when I wasn't arriving at my destination when I thought I was supposed to.  Day 1: Skyline Gate to Robert Sibley, including sections of Redwood Regional Park,  Huckleberry Botanical Garden Preserve and Robert Sibley Volcanic Preserve. (4.3 miles)


The next day I took a walk with my friend and then ran back to the house via the trail I was supposed to have used the day before instead of getting a ride back with her. The walk was on a nice flat path and the run was a lot of ups and downs on a single track with some really good views of the Bay. I got lost once but followed, stalked was helped by an older gentleman with a 100 miler shirt on. Day 2: Nimitz Way to Robert Sibley, including sections of Robert Sibley and Tilden Regional Park. (5 miles)


On the third day, I was going to meet up with my friend for a walk at 9 a.m. I decided to run from my house to meet her. From what I could tell, it was about 9 miles. I left at 7, which should have given me plenty of time. However, you may have guessed this already, but I got lost. I ended up doing an extra 2 miles, rounding out this run at 11 miles (but only 9 of it was on the BA Ridge Trail) Day 3: MacDonald Staging Area to Procter Staging Area, including Redwood Regional Park and Anthony Chabot Regional Park. (9.1 miles)

**I will have to do a more through calculation later, because I have also been on some additional portions of this trail without even knowing it (see stars on map above).

So, the general theme of the Bay Area Ridge Trail Exploration Project (that is the official name and has been approved by the FDA and the USDA) is my getting lost. I am not sure if it's my map reading skills or my navigation skills, or their lack of signage/good maps. Or all four maybe? I have had a lot of fun finding out the routes and making a point to try a new route, rather than the same one that I always do and am comfortable with.

I think it's a great way to see new areas near my home as well as to push my boundaries a little bit. I also feel that it keeps running FUN (or hiking/walking). And the views have been fabulous! I also love the fact that within the city there are such beautiful green spaces. It's like you are all alone running along a trail. I barely saw any other people and there are rarely even commercial structures in view. I can't wait to try some of the other sections!

Do you have any hiking trails near your house? Have you ever done any hiking on the PCT, Appalachian or Continental Divide Trails? Do you like to try new running/hiking/walking routes or do you stick to the tried and true?
at 03:00