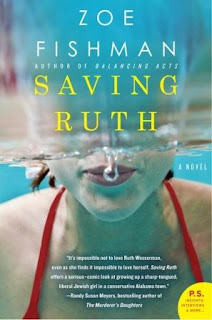 
This book was about a young Jewish girl from the south who returns home to Alabama after going to college in Michigan for a year. She has changed, and not all for the good. She left home a bit overweight and developed an eating disorder while she was gone. When she returns home, she not only has to face that fact, but she also has to deal with other adult issues such as familial problems, racial issues and romantic endeavors.


I remember being 19 and coming back home "all grown up" after being gone for a year. I didn't have the same issues that Ruth had, but this book still hit a place in my heart because like Ruth, at that age, you spend a lot of time trying to find yourself. She unfortunately goes down the wrong path and decides to starve herself in order to stay thin, and when she does, she discovers a new found popularity. Or perhaps she was not unpopular before, but only discovered a new found confidence. Didn't we all experience that one way or another?


However, this confidence is unhealthy. To top things off, her brother David, who used to be the life of the party, and who is also home from college, spends his summer brooding and moping around. She feels like he is ignoring her and is upset about something but he won't talk to her about it; he just brushes her off.

They both deny having any problems until there is a big blowout with the whole family and they both have to finally face the truth. They are not alone, however.  It turns out they are not the only one with issues to deal with. I found this also quite realistic, as it seems like much of the time many of us tend to deal with (or point out) other people's issues before admitting or fixing our own.


I found this book a quick and easy read. I liked Ruth and her family. I found her believable and likeable and at times both immature and mature for her age. I really wanted her to succeed and I felt that she did, in her own way. I


If you want to read more reviews or see the rest of the tour dates for this book, you can do that here. You can also learn more about Zoe on her website, Facebook, and Twitter! Zoe will also be interviewed by Book Club Girl on the Book Club Girl On Air show on Tuesday, June 12th at 7pm ET.

Do you remember your first summer (or trip) back home after being gone for college? How did it turn out? Did you feel like an adult?

I received this book from TLC Book Tours for free in return for an honest review. I was not required to post a positive review. All opinions are my own.
at 03:00