Last year if you would have said that I would run a 50 kilometer race (EVER!) I would have laughed in your face. One year ago at this time, my longest run for the year was 9 miles and my longest run/race of all time was a half marathon. I had no idea how far (literally) I would come since then.

These feet haven't failed me yet. But I sure do run them to the ground.

So, how was it, you ask? Overall, in a word, I would say: good. I got to the site around 6:30 for a 7:00 start. The race director was very involved and cheerful and his wife and daughter were there, helping out (wearing a fashionable North Face sleeping bag -- I hear it's all the rage). The weather was about 50 degrees and overcast (typical Bay Area foggy morning), which was perfect for racing.

For my own memories, I am going to recap some of my gear as well. I wore my water belt with three bottles (2 with H2O; one with Nuun). I accidentally forgot the holster for the fourth one, but I would have worn four. I wore a hat, no sunglasses, a wrist band and my regular old Nike tempo shorts. I wore my "I survived 26.2 shirt" from the CIM. I also wore my old Asics, which have about 700 miles on them (and plenty of dirt). I carried two apple packets, a chocolate gu and a packet of Honey Stinger chews.

Now for the good stuff. I have to admit, much of the race was in a haze. I remember a lot of chugging along, some of it with other people, some of it alone. I remember the aid stations, because they have food!

The start went well. The first mile or two was on a paved loop around the lake (remember the Big Bass? Same lake!) After we went over the dam, we took a sharp right and headed uphill. One of many hills. Here is the elevation chart. 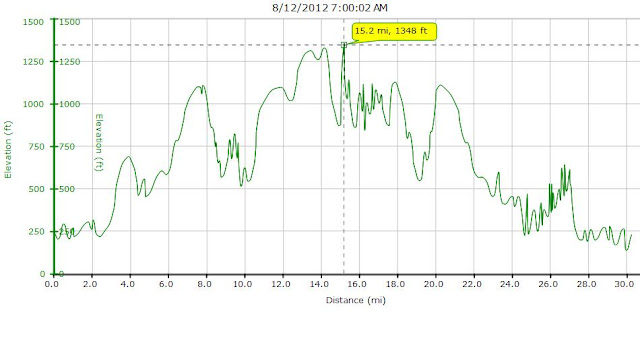 I felt good though. In fact, often during really hilly trail races, I walk up a lot of the hills, but for a while this time, I took them at a slow jog.

There were a couple people I was pacing with at this point. One girl in a sport bra and a skort, a guy in a quicksilver running club shirt and a girl with a neon yellow shirt and a Solomon hydration pack. Again, like my last trail race, I would beat them on the uphills and they would pass me on the downhills. I guess I am more like a dump truck than a Ferrari. The next 6 miles were a little bit slower and a little bit more uphill than the last 6, as you can see from the chart. Also, at the hour mark (around mile 7) there was an aid station, and I stopped for a minute and had a couple of snacks. I was not super hungry, but I had a piece of banana and a chomp of some sort, as well as a swig of coke and then I refilled my water and was on my way. I had my first applesauce around the 1.5 hour mark.

At mile 14, there was THE Aid station, the Skyline aid station. I had predicted a total time for this race of about 6 hours. That would put me into Skyline around the 3 hour mark. My Dad was possibly going to try and catch me at one of the aid stations before meeting me at the end, so we had done some estimates and three hours seemed reasonable. I got to Skyline at 9:00, two hours after I had started! I ate some wonderful, gorgeous watermelon, got a water refill and a potato with salt and chugged two Gatorade type drinks.  I glanced around for Dad, chugged another coke and carried on. The guy right in front of me chugged his coke and then let out the largest burp I have heard, scaring an old couple and their dogs.

I am actually surprised that those miles were not faster, as they were a pretty good mix of downhill and up, with no huge hills that I can remember. But, like I said, this is where things get fuzzy. What I do remember? Looking at my Garmin right around mile 15. The thing is, I had set my Garmin onto metric to do the Run with Jess virtual Olympics (100 m etc) and I never set it back, so it was still on metric. So. Right around the 22 km mark, I started looking at my watch a lot. The problem with km is there are so many of them! Thinking, "I still have 30 km left" is A LOT worse than thinking, "I only have 18 miles left". To make it worse, my brain doesn't do math well when running and I kept getting confused about how long I really had left.

Needless to say, the km or miles or whatever they were, went pretty slow after about the 30k mark. This is also when my feet started hurting. First it was the ball. Then it was a blister on the sideways toe. Then my knees started to ache. I was hoping for more uphills and less downhills. Yes, I said LESS downhills. Downhill caused my soles to ache and my knees to throb. I was not in bad shape soreness wise; my energy levels were pretty good. I did eat my Gu somewhere around mile 25 maybe. Every time I looked at it, I was hoping that my Garmin had gotten messed up since we were going through so many trees and that it was 5 or 6 or 8 miles off and really I was almost there. Then I asked the bean counters and they said cheerfully, "ONLY 6 more miles!" Only? Grumble, grumble.

There was one last aid station around mile 28. I got to it, stopped, got a water refill, ate some cantaloupe, got made fun of for wearing a marathon shirt, downed a coke and a Gatorade and asked how much farther I had (because at this point, I could not read miles or km or barely articulate anything for that matter). They said, "three easy miles, down this hill (ug) and on a rolling loop around the rest of the lake (rolling!? I almost cried)."


The last three miles were hot and dusty and everyone who was going the opposite way kept saying, "you are almost there".  I know they meant well but I my feet were crying, "let me out!" I had to go to the bathroom but there was a woman right behind me and gosh darn it, I was NOT going to let her pass me. And then Dean passed me. And then I crossed the finish line. And I was still alive. It was a miracle.

After that I ate about 2000 calories in meat products (while the sports bra girl sat next to me and had a salad) and beer. In about 6.5 minutes. I can eat 3000 calories A LOT faster than I can burn them!

The verdict? I wore the wrong shoes. I shouldn't have worn my old, worn out shoes. I felt good except for my feet. I could have kept going if not for the blisters and rubbing and discomfort. I also had a way slower second half than first half, so I probably went out a bit too fast.

Are you where you thought you would be (in fitness or in life) at this time last year? If you had 3000 guilt free calories, what would you eat?

Don't forget to stop by Jills for other Fitness related goodness.
at 03:00