This year was my first ever turkey trot! I have always wanted to do one but have never been near a place that had one for Thanksgiving day. This was a lot of fun for a few reasons. First of all, I have not ran a 5k in a while and I forgot how much fun they are. Secondly, it was pretty small, and I like smaller races. It feels more like a community event rather than a production. It was pretty cold, about 30 degrees, but once you get running, it warms up pretty fast. 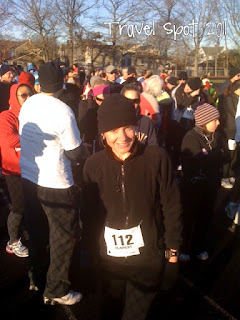 This was the second year that the city has put this race on and I think that they did a good job. Here are the pros and cons of the race.

Pros: Friendly people. Many of the volunteers were kids, so it felt like a family affair. I liked that. The registration was only 20 bucks and I did get a free t-shirt, even if it was cotton. The race money goes to feed the hungry, which seems not only like a good cause in general, but really feels good on Thanksgiving. The food at the end was great! There were coffees, bagels, water, granola bars, craisins and bananas. It was one of the better hauls I have seen!

Cons: The race was not timed. This is okay, since I have a Garmin, but it feels weird to not have the clock or at least a slip of paper you write your time on so they can put it online (they did this in New Orleans when there were no chip timers). The course started on a track and several of us who were in the beginning of the pack at the start, myself included, went through the wrong gate. This may or may not have been the reason that my Garmin said that my run was actually only 3.02 miles, not 3.1. The race started about 15 minutes late, which is usually not too big of a deal, except that we had many other things to do (and to cook) that day, so it was a little annoying.

What is your favorite race distance? What did you do Thanksgiving day? Did you exercise or did you embrace the food coma?
at 03:30