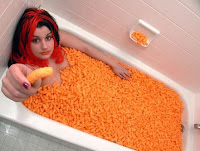 There is a reason they say, "An apple a day keeps the doctor away" instead of, "a bag of Cheetos a day..."


An apple only has 47 calories. A bag of chips (the 99 cent size) has about 400. Think about that the next time you feel that yearning in your belly for a snack. Now, if you only ate “one serving” of the chips, which is about a third of the bag (as if!) you would only take in about 130 calories, which is approimately the amount you should be taking in for a typical snack.


The average female (150 lbs) needs about 2000 calories per day, the average male about 2500. That is, the average semi-active male or female. If all you do is sit on the couch all day, you need to reconsider these numbers. I have probably preached about this before, but for those of you who don’t know, I will explain one more time.


There is a thing called RMR (Resting Metabolic Rate). This is what you would burn each day if you did nothing. If you just sat on the couch all day and ate potato chips and watched TV, you would still burn a certain amount of calories. There is a formula, based on your weight, height and age (for more info you can go here) which I am not going to explain. However, the average (again, 150 lb) woman’s RMR is about 1500. So, if you sit around all day (which many of us do – hello…office!) and then eat your recommended 2000 calories, you are going to have an excess of 500 calories.

Sounds easy, right? Well it is not easy if you are gobbling up a 400 calorie bag of chips as a snack every day! Add that you’re your normal three squares a day and you could easily go over 2000 calories a day. So, next time you are considering a bag of Cheetos out of the vending machine at work, think twice and grab an apple instead.
at 09:23