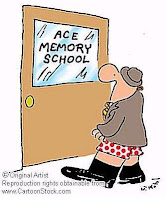 I was talking to my cubicle-mate yesterday about another girl that we both have worked with. We chatted about this girl and where we knew her from, etc. It turns out we had both been in Florida at the same time as she had…so we started talking about things that we did while in Florida. As it turns out, a friend and I had traveled to St. Augustine, FL one weekend to meet with her friend and coworkers. My cube-mate said that he had done the same thing – traveled from Orlando with a co-worker to meet up with her friend in St. Augustine.

As I sat talking to him, all of a sudden it dawned on me – I had met this guy before! When we went to St. Augustine, there were about 6 people all together. My cube-mate was one of them! How could I have forgotten that I had already previously met him? We have been working together for about 2 months now and I never even realized. Granted, the St. Augustine trip was about 2 years ago, but how quickly we forget!

I was talking to a friend the other day and she said that she read an article which stated that the average person only remembers 20% of what they learn each day.

Music conjures up memories; smells, tastes and sights remind you of something you have experienced in the past. Memories are what keep us going from day to day. If the statistic that my friend said is true, imagine what we could be capable of. I mean, if right now I am only remembering 20% of what I learn every day, imagine me at 75% or even 100%!! I would be able to speak French fluently; I would be able to quote policy at work; I could be a Travel Guide or a Physical Therapist.

However, that is not the case. If the AVERAGE person remembers 20%, I may be lucky enough to be on the top of the average, but honestly I think I am more like a 50 percent than 80 percent. I am constantly preparing myself to say something and when I finally get the chance I have forgotten what is was I was going to say. Or the other day I was going to go to Target for something and when I got in the car I could not remember what is was to save my life.

There is also something to be said for the fact that the older you get, the less you remember. Why is that? Do we only have a certain amount of space and once it is filled, we have to push SOMETHING out in order to acquire something new? So if I want to learn Spanish I may have to forfeit my banana bread recipe? If this is so, how do we categorize what is important enough to keep and what we can throw out with today’s trash? And, if that is so, do pack rats in life have better memory capacity?

I asked my mom about it and she said that it is not that she can’t remember things as much as it is a combination of her not listening and not remembering. And as my parents get older, not hearing comes into play as well.

This has been a link up with Dare to Share, where the topic was LOSS:

Email ThisBlogThis!Share to TwitterShare to FacebookShare to Pinterest
Labels: 2007, Forgetting