Do You Know the Way to Fenway? 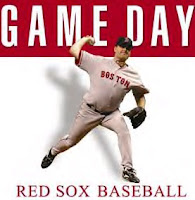 I flew into Boston on Saturday afternoon, arriving just after lunch. I met my friend Garret downtown and we quickly set off to explore the city. I have been to Boston a few times before. I have flown in and out of the city a few times, went to visit fiends and stopped by on the way to grandma's house. However, usually someone leads me along and I follow. This time Garett and I were on our own.

We started off (of course) at the Commons, and after seeing a duck tour, decided that that is what we wanted to do. Why not be a cheesy tourist? After all, that is kind of what we were anyway (you should have seen Garett handling the map and me with my camera). So, we decided to ride the duck. However, the day's tours were already sold out, so we would have to check back the next day. We decided to stroll along Boston's "Rodeo Drive" (Newberry St.) instead. As we were walking, we noticed many, many people wearing Red Sox gear. I though, "Wow, they really do love their Red Sox here!" Personally, I am an avid Giants fan, but I rarely see this many people wandering around the city with SF gear on. After a while, we started noticing that everyone was headed the same direction and we finally came to the conclusion that there must be a game today.


So we headed that way. We thought, what the heck, maybe we can get tickets to a game. We did not realize how competitive the ticket-getting process actually was! The line for game day tickets was about 4 miles long. However, after talking to some seasoned fans at the front of the line, we decided that we may just have a chance (in hell) of getting tickets to the game. The tickets went on sale at 5. At 7 we had FINALLY gotten to the front of the line. We thought - this is it! Our chance! We are in! And then...they stopped selling tickets. There were only 4 people in front of us; we had waited for almost 3 hours! They couldn't stop now! But they did. The only way we could have gotten in is if we would have paid 150 a ticket and not been able to sit together.


The next day we went early and rode the duck, then went to the park, where the line was about a 10th of the size it had been the day before (we also got there 3 and a half hours early). When tickets went on sale, we were there, at the front of the line with Visa in hand. And we got in!


The Red Sox lost to Texas that day but in our minds the day as a whole was a winner!
at 08:02