Last week I decided to join up with Laura in a sugar detox, where we would remove all processed foods and sugars from our diet for one week. I mentioned before how I am not really a sweets person, so things like soda or dessert would not be an issue for me. However, it was kind of fun to see what there was in my life that I did miss. 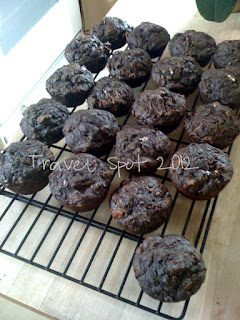 I think I mentioned in my last post that I would have a hard time with coffee and morning oatmeal, since I do use a bit of Splenda in both (or for coffee I use flavored creamer). These were not as bad as I thought they would be. Actually, I put a little unsweetened applesauce (or extra fruit) in my oatmeal and I was good to go! For coffee, I just used whole milk and it turned out fine as well!

The other thing I thought would be difficult was running fuel. I had a race on Saturday and it turned out okay, food-wise. I had some oranges, some bananas and some potatoes with salt. If the race would have been longer, the no-sugar may have been an issue, but as it was, it turned out fine! I did kind of miss the gummy bears, as these are my go-to trail race fuel!

I was worried that evening time would be difficult, as that is when I usually have a nice little after dinner snack, which is usually dried fruit or trail mix. Unfortunately, most dried packaged fruit has added sugar, and my trail mix has mixers such as yogurt chips, dried fruit (again, with sugar) or chocolate chips. So I thought I would just eat plain almonds, but actually I made do with regular fruit instead.

So...what WAS harder than I thought?

1. Booze: I actually had a huge fail due to the fact that I went out on Wednesday to see a friend's band play and had a couple of beers, on Friday for happy hour for a couple glasses of wine and on Saturday to a music festival (and a few more beers). I kind of sound like a lush! To be honest I don't really drink very much usually and most weeks not at all, but this week was probably a bad one to quit sugar! However, since I am usually pretty much of a hermit, I don't feel bad about getting out for a change and having a few drinks!

2. The small things: Things like gum and vitamins (I use the gummy ones) were something that I did not even realize I used very much. However, gum is my cigarette; I have it after lunch, before I start my commute home and often during a run (okay maybe that's not really like a cigarette...). It's such a habit to always have a piece at the ready. I also chew it when I am craving a sweet, so it usually curbs my craving. So I did have even more fruit than normal this week!

3. Eating out / People cooking: I stopped being a vegetarian partially because I was tired of being THAT picky person. You know the one who comes to your house when you are cooking meat and you have to cook something special for them? So when I went to my friend's house for Mother's Day, I ate what was there, which was processed sausages, tomato pie, croissants etc (plus Birthday fruit tart!). Also, eating out, when  you can't control what goes into the dishes, can be difficult! I went to Thai food and got the chicken curry, which I think may have had peanut butter or sugar in the peanut sauce...but I am not sure!

So...how did this make me feel?

I have to be honest, I did not have a revelation and a feeling of supreme health. I felt the same as I always do. Maybe this is because I don't really eat that much sugar or processed food anyway, so it wasn't a huge change really. I probably snacked less after dinner, which is good, but I made up for it by eating about 5 extra pieces of fruit in order to feel like I was getting a bit of sugar after lunch (one day I ate 4 apples). I think I will have to try this again on a week where I don't have any social outings coming up!

Did you join up for the detox? Have you ever given up one type of food? Is there anything you feel you could probably cut back on food-wise?
at 03:00