We were camping in Uruguay and it rained SO hard. I thought the tent was going to get swept away. By the way, we named all of our accessories.

So, Selma was SOAKED! And Vicky and Elvis were getting wet, so we had to bring them into Selma with us...it was a bit cramped. Then Chris had to go out into the rain and dig a trench around Selma so we would not get carried away or wet. Pictures below: 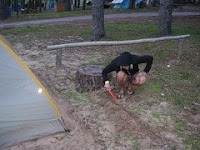 Haha, just when you think you are organized....


We had a very interesting Sunday last weekend. First, let me explain a little something. I want to go to a futbol (soccer) game. So, I asked about the schedule while we were at the Sheraton and the concierge told me that River and Boca both played on Sunday, River at 5, Boca at 7. In Buenos Aires. Both stadiums are easy to get to, and he had said that to get tickets we needed to go to the stadium. On Sunday, we were at Mar del Plata, which is about 5 hours from the city, so we planned on leaving early to give us enough time to settle in and then get to the stadium. On Saturday, we bought 7 am tickets for the next day.


On Sunday, we missed our alarm and woke up at 730. I was so pissed off, as I knew that if you missed your bus, you had to re-pay for your ticket. There was no such thing as a refund. So, we hustled to the bus station, becuase we still wanted to get an early bus. We arrived at the station at about 2 mintues until 8. The counter we had bought our ticket from was not open, but one of their partner companies had an open counter. We went and asked the guy what we could do and he said he thought we could get onto a later bus but we would have to enquire at the counter we had bought the tickets at. I asked what time it opened and he said 8. I looked down at my watch; it was 8:02. The counter was still not open. We sat down at a coffeeshop for a quick breakfast, while still continuing to check on the counter, which was still not opening.


Finally at 9, the counter opened. By now I was cursing the Argentines and thinking how the hell could they be an HOUR late in getting open!! We went to the counter and the man said he could get us on the 9 o'clock bus. I looked at my watch; it was 9:15. I said, ahora? (now?) and he said, no, in 45 minutes. I showed him my watch, ÿou mean at 10?" I asked. "No," he said, "in 45 minutes! We set our clocks back last night". Oh MY god! I was suprised. They had JUST set their clocks FORWARD about 2 and a half months ago! So I guess they observe "summer forward" AND "summer back"!

So, we bought another ticket and made it back to Buenos Aires. Next stop, the Boca Jr Stadium to hopefully catch that futbol game. We caught the bus to the stadium about 2 hours before the game and there was nobody there!! I went to ask a guard what time the game started and he said that there was no game today, that is was NEXT Sunday! So, we went to the local bar, which was empty, and sat down to have a beer and figure out what we were going to do. The owner of the bar, Luis, sat down with us and we ended up hanging out with him for the next three hours, just shooting the breeze and learning about Boca and slabs of meat and swords and all kinds of things! He was great! We promised to come back when we got back into town to sample his Sunday Asado (barbeque); he even said he would cook some fish for me!

So, we messed up twice in one day but got to meet Luis, which made it all worth it!
at 14:48 No comments:

I love this picture...I just had to put it up.
It reminds me of the Lucy Kissing A Cow photo. 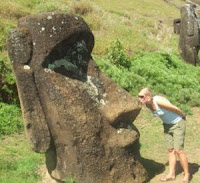 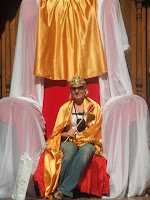 Since my last post, CK and I spent some time in Mendoza, drinking more wine, enjoying the Mendocino life. We went on a wine tour, which is not what I was used to. We only got to taste two types of wine at each place, however, the tour was interesting. It was all in Spanish, so I only understood half of it, but I still feel like I learned something. We stayed in perhaps the worst hostel ever while there. It was so dirty and nasty; I didnt even take a shower for a couple of days because I was so disgusted by the shower. Also, they were supposed to have breakfast included, and there was none. They were supposed to have internet access and there was none. They totally falsly advertised and were so dirty to boot! The worst thing is, it was the wine festival and so we ended up having to stay there regardless. However, in spite of this, our stay was very nice.


After Mendoza, we went to Buenos Aires to apply for our visa to Brazil. S had done this earlier in the year and had had a really bad time of it. He had to stand in line for 6 hours or something. We went early on Monday, thinking we would have the same experience. However, we were in and out in about 15 minutes, leaving us a whole extra day to hang out in the city. We had even brought lunch, thinking we would be stranded in line and not able to leave to get food! It was a welcome surprise.


From Buenos Aires we came to Mar Del Plata, where we are now. It is a beach town about 5 hours south of the city, where all the city dwellers come for the summer months of January and February. However, since we are here in March, it is still warm, but not very busy, which is perfect. So, we are back at the beach again. In Argentina this time though. Yeah, I know, we just cant get enough of Argentina, really. We actually like it so much, we decided to find an apartment in Buenos Aries again. I will take a Spanish class, and we will sit at the cafes and watch all the beautiful people go by.
at 07:53 No comments:

Back In The Land of Earplugs

I have been spoiled for the last couple of weeks. Mr. L came to visit and he splurged on a few places that were a lot nicer than the ones I have been staying in. Also, I finally used up some of my Sheraton points and splurged for a five star treat in Santiago for a few nights.

In a nutshell, the past few weeks...

1. Valdivia, CH - College town, near a river, famous for its fish market....we only spent a day here before going back to the lake district.

2. Pucon, CH - Lake town, with many National parks, Lakes and Volcanos. We hiked Vocan Villarica, which is about 3000 Meters of steep climb, complete with dust and smoke. It was not a very difficult climb, but it was hot and I did not have enough water and it felt like I was smoking a few packs of cigarettes while hiking up a dusty mountain. We also spent some time at the lake, which was packed with Chileños and their niños and people trying to rent you quitasoles (umbrellas) but was still a refreshing treat.

3. Mendoza, AR - A little unexpected side trip - a sample of the outdoor cafe life, a little bit of wine and lots of relaxing days spent drinking coffee and chilling in the shade. Mendoza is the main wine region of Argentina, known in the US mostly for its Malbec, I believe. There are many others, of course, and try as we may, we did not have time to sample them all.

4. Viña del Mar - Beach town on the W Coast of Chile, this is actually part of the outskirts of Valparaiso, CH. It was nice, very much like Santa Cruz, a little bit foggy in the AM and then around 3, the fog blows off, leaving a very nice day behind. The beaches were packed, the seafood here was delicious, the houses on the hill were very quaint and precariously perched.

5. Easter Island, CH - Oh the heads!! I am so glad that I went here. It is very far out of the way; it was a 5 hour flight each way, but it was totally worth it. The history here is so interesting and captivating. Maybe I can summarize a little. There were two tribes, the long ears and the short ears. Both of them made these statues of the heads, called Moai. They went to war, and many of the heads were tipped over (and still are). However, some have been put back upright, so we can enjoy them. They were huge! Some of them have hats and the hats alone are as tall as me. It was great! This is a beatiful polynesian island which would be great all on its own, but with the history included it was a ten!

6. Santiago, CH - A couple relaxing days spent by the pool at the Sheraton was exactly what we needed after so much moving around. Here I met back up with Chris and we got back on the move again.

So, now I am back in the land of earplugs, cheap hostels, noise and PB&J sandwiches!!! More news later and pictures to boot!
at 11:31 No comments: